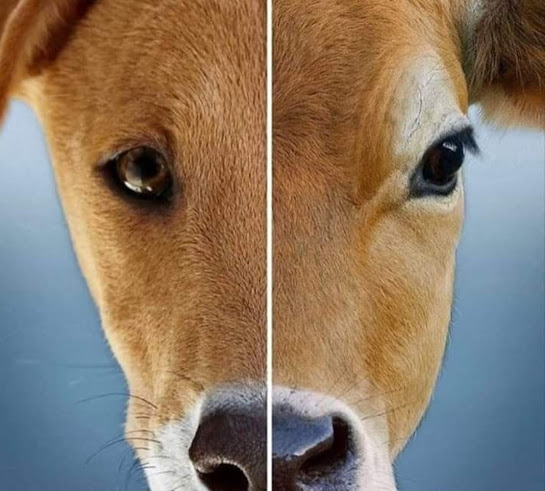 Posted by Shivadam B at 5:02 PM No comments:

Where Do I Get My Protein?

We don't want to harm animals, and we want to be healthy. No problem! Wondering about Protein?

Posted by Shivadam B at 1:10 PM No comments: 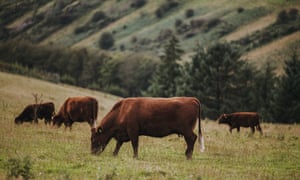 This excellent report debunks the myth that organic farming of animals is better for the environment.

We know from so many voices now that one of the best things humans can do to address climate change concerns is to dramatically reduce or eliminate consumption of animals and their products.

Posted by Shivadam B at 3:46 PM No comments: 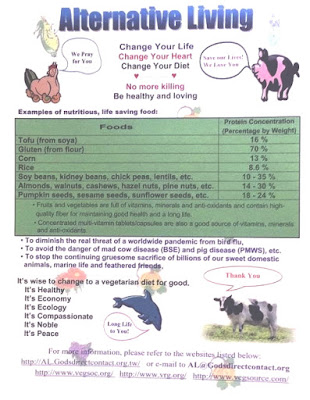 Posted by Shivadam B at 4:08 PM No comments:

A Guide to Vegan Arguments

This is a vast resource worthy of sharing:

"Guide to justifications for harming and exploiting animals"

Posted by Shivadam B at 3:52 PM No comments:

Here are some points of consideration arising out of the Tibetan Buddhist world, from eminent leaders. 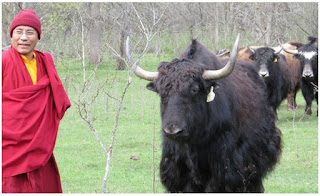 FROM HH the Gyalwang Karmapa:

"Our current level of meat consumption has many detrimental effects on the planet. But if we are thinking in terms of ending world hunger, what should interest us greatly is how many more people we could feed with existing resources if we made a significant shift from meat eating to vegetarianism.”

"Because I was eating meat, therefore I also influenced other people to eat meat. If I like meat, then people around me are influenced by me, because I give meat. I said, 'I would like some momos; let's go and get some meat momos.' And then other people eat meat momos."

An advocate of Vegetarianism, he has written the very thought provoking article, "Taking a Stand," from which another quotation appeared earlier.

"To use scripture to justify the disgusting and cruel habit of eating meat is both dishonest and unworthy. I’ve never been able to reconcile the preaching of Metta-Karuna (Loving-Kindness & Compassion) with the practice of meat-eating; they contradict each other. And as to seeing, hearing or suspecting that the animal was killed especially for someone, well, for whom is the animal killed if not for those who eat its flesh? No amount of twisting, juggling and verbal gymnastics can get around that. If nobody ate meat, the butcher would not kill the animals. This is not only obvious to everyone except those who refuse to see, but is in line with the Buddha’s teachings about the Law of Dependent Origination, or Cause-and-Effect in the moral realm, whereby it is shown how one thing leads to another in a chain-like sequence."

The following are his comments concerning the recitation of the six syllable mantra OM MA NI PAD ME HUNG (the Heart Mantra of Chenrezig) and the need to practice non-harm to sentient beings.

"As a Buddhist, we practice so as to benefit self and others hence we do the six-syllable mantra practice. However, when we eat meat be it chicken, pork, fish or eggs in our daily lives, we are creating immense negative karma. If on the one hand, we chant the mantra and on the other hand, we eat the meat of mother sentient beings, then our words and actions do not tally with one another. We are not doing as we preach. Can this be considered as loving kindness and compassion towards sentient beings?"

Posted by Shivadam B at 3:37 PM No comments:

A discussion today in a group I am involved with invited inquiry into the ripe topic of White Privilege. One group member asked whether we can expand the conversation to include the problem of oppression of animals. Here is a brief excerpt, concluding with my reply.

I’d like to request that we broaden this self-inquiry to include the rest of the planet and most of the life on it? Why don’t we also, in addition…. please…. also look at our Human Privilege and its disregard for the Rights of Nature?

I would gently say that if we are not willing to center the idea of white privilege and supremacy in our inquiry, then we will never be able to dismantle our human centric ideas of being on this planet. White privilege, in this context, comes from a long rooted belief in the Doctrine of Discovery & Manifest Destiny which impacts all Westernized and Colonized countries. It is the fundamental idea of separation and domination.

If we, those who lack melanin and who have the most access to resources and power in this organization , are unable to do this fundamental inquiry and transformational work, then the rest is bypassing.


We have an opportunity here to look at related issues together, as each derives from a "fundamental idea of separation and domination," one involving race and the other involving species. At the core, the problem is the erroneous bias itself, no doubt learned and nurtured habit, which can be viewed and questioned in the light of honest self-inquiry and assessment. The outward expression of either can help to reveal both and thereby help to dismantle each other, rather than sequentially, one after another. We can ask ourselves how and why we feel separate from others, whether based on race or species, and more importantly, how we may behave in ways that oppress others in either and both categories.

Matthew Fox on Animals and Humans

"Like Saint Francis, Meister Eckhart championed the spiritual dimension to our interacting with animals.  He comments on the “equality” we share with animals."

"When it comes to the great gift and pleasure and power of life, Eckhart is saying, animals and ourselves are equal. There is an entire basis for animal ethics in this Eckhartian revelation.  Victor Hugo predicted that in compassion to animals and plants a “whole great ethic” would be born in the West.

Posted by Shivadam B at 1:23 PM No comments:

Not To Be Confused With Biovinity

I just learned of the condition, boanthropy:


Boanthropy is a psychological disorder in which the sufferer believes he or she is a cow or ox. The most famous sufferer of this condition was King Nebuchadnezzar, who in the Book of Daniel “was driven from men and did eat grass as oxen."

I am surprised, though I myself have been craving wide open, green pastures lately, and I am both a Taurus and an Ox (in the Chinese system).

All of which leads me to revise one of my favorite jokes, from canine to bovine:


A guy goes in to see a psychiatrist and says:

The doctor asks: How long have you felt this way?

The patient replies: Since I was a calf.

May all beings be well and happy (cows, dogs and people too!)